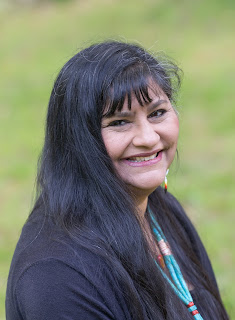 Professional educator, Claudia Fox Tree, M.Ed. (Arawak/Yurumein) teaches courses and workshops on transforming curriculum and culturally responsive teaching practices. She also leads conversations “un-erasing” Native American First Nations People (FNP). She gives voice to First Nation experiences (past and present) and asks allies and co-conspirators to come on the journey with her. Her presentation features discussions on identity, culture, contributions, stereotypes, and historical inaccuracies.
GENERAL DESCRIPTION:
The journey of developing a counter narrative to missing information and misinformation about the First Nations people of North and South America begins with un-erasing indigenous voices, learning what we were not taught, and continuing to have those conversations with families and friends. Digging deep into the story of the formation of the United States and its continued oppression of First Nations to present day requires us to boldly moving into the future with accurate information. Educating the next generation requires us to learn what’s happened and is happening, change our language and attitudes, speak up, and bring other people along. Claudia will address assumptions that perpetuate stereotypes and myths, expand ideas about “American history,” and explore the role of language.

SOME PRESENTATION GOALS ARE TO…

To purchase jewelry, see this Pow Wow and event listing. For consultation, see this Speakers' Bureau. Go here for more information about Indigenous People of the Caribbean.